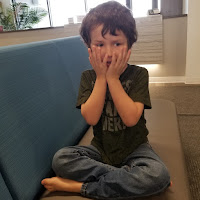 Autism in our house Officially started On Xavier's third birthday. At the age of 2 our little man was referred for a diagnosis through the local Heath unit. This was a process that felt painfully long, because no one helps you until you have that magic paper saying your child has a learning disability or an Autism Diagnosis.  It took us a year waiting for CHEO to do his diagnosis.

While the wait was paiiiiiinfully long, i'm forever grateful that we took that route. Xavier had the most amazing doctor we could have asked for. She made sure that he had every referral done that we could ever imagine. One thing i really think that they should include when they hand you that paper saying that your child has autism, is a welcome packet.  "Welcome to the most Exhausting, Stressful rewarding ride of your life" p.s. get the cheo parking pass. You WILL NEED it

He has had an MRI, to check for spinal bifida, he had a hydro seal corrected on one testicle, he's been to cheo dentistry, he's been put to sleep for his hearing test. eyes checked,  you name it. We also had a trip to the CHEO Genetics department.We also found out Xavier and i have What's called P-Ten. Which means yearly appointments to be sure that we haven't grown any tumors. When it comes down to it, If it wasn't for our sons Autism Diagnosis, i may not have found out i have P-Ten and developed breast cancer before knowing what was happening.

January of 2016, one of the numerous appointments we had was concerning the Ontario Autism Program. After his assessment for that, we were told that the wait time is approximately 18 months.
When i asked her what happens with that because he'd be school aged, the woman informed me very matter of fact that he'd be in school 1 day a week and therapy 4 days. Truthfully. i had a hard time not laughing in disgust. I just looked at my son and though, that so doesn't work for me buddy lets go. Since then, his dad and i have worked very hard  helping him reach his potential and learning new things, volunteering with autism organizations/events. learning and meeting new people.

He has yet to qualify for any Applied behavior analysis therapy. This therapy is what's used to help children on the Autism Spectrum catch up on skills they are behind on. It's taken some kids from crying and headbanging on the floor, to talking and playing at their age level. 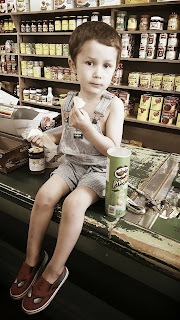 We often take Xavier out just to practice shopping so he can learn how to make choices without feeling overwhelmed. The first time i asked him to pick a shirt to wear from a choice of 2 blew his mind. His doctor said it best. You don't become a parent expecting you need to learn how to become a therapist. Xavier's had the usual rounds of Speech and Occupational therapy at the CHEO center for autism. SDG developmental Services has helped us work with him on his sensory issues. He's lucky enough that we live in a community where the school has excellent care for his learning needs. All these things really aren't enough to ensure he's successful in life.

The progressive conservative government's plan to cure the wait list for 2300 kids is just a numbers game. It's based on Age, Not clinical need. I realize everyone is going to have ideas on what they think money should be spent on or what they feel is a better idea.

The reality is, if you have a child with Extraordinary needs physical or learning. You miss work often. You may have a child who gets frustrated with not being able to communicate who may hit and become aggressive.  Xavier had a social story about choking and how it's not ok to do that. He's bitten me so hard that i've had his teeth marks for sometime. A large number of children on the spectrum have sleep disorders. which means that parents /or one parent may be up literally all night trying to get the child calm or back to sleep.  There are also sensory issues with food. Kids on the spectrum won't just eat when they are hungry. They will starve themselves first before eating textures that they can't physically handle.

You may have to deal with having a child who has pica (Pica is a psychological disorder characterized by an appetite for substances that are largely non-nutritive, such as ice (pagophagia); hair (trichophagia); paper (xylophagia); drywall or paint; metal (metallophagia); stones (lithophagia) or soil (geophagia); glass (hyalophagia); feces (coprophagia); and chalk. ) they may have a poop smearing child, or someone with no fear and runs into traffic.

Ford has previously made comments referring to the autism community. The sort of comments that literally make any parent of a special needs kid cringe.

This is the man that is now in charge of 1 in 56 kids in Ontario's future. I say future because therapy is a life long process with a learning disability like autism. A child needs to be taught things that come naturally to others. Example, You could tell someone hey. Can you put this away for me in the kitchen? That person may naturally think. sure. hey i can put that away. it's a cup...i'll put this in the sink. You may need to tell someone on the spectrum. Hey...can you put this in the sink, in the kitchen for me?

He is providing Childhood budgets. These funds are expected to last until the child turns 18.

According to his plan, parents aren't being handed the money they still have to go through a provider to access the funding.  So while we have the choice, by 2021 it needs to be by a provider listed on the Ontario Autism Program's site.

My fear is that of the mental health of the vulnerable. a large number of children on the spectrum suffer from anxiety, feelings of isolation and depression. Combine that with the lack of services for these children as they get older. Where do they go once they outgrown daycare's?

Not all babysitters are equipped to handle the different aspects of caring for someone on the Spectrum. Many families struggle to find respite care. This could lead to them being cared for by people who aren't able to handle a melt down which in turn can then lead to someone  handling a situation wrong and someone getting hurt.

Some children have extraordinary needs that aren't average for any kid to have. My son for example, is non verbal has some pretty high deep pressure needs has asked most of the day for his feet to be rubbed and squeezed. I've had to explain to numerous support staff that if he puts your hands on his head. it's to squeeze it as hard as you can. It "resets" him and his mood and his sensory needs. To have someone who isn't trained properly applying pressure like that on a 5 year old could have some serious repercussions.


14.19 million people live in this province. We are a democratic society. We need to let them know making these particular changes and telling us all that it's basically to bad so sad, we aren't changing it...it's not ok. Not one Fucking bit. Parents and organizations won't feel a long hard four years. We are the ones who are in this for life. We wake up at 2am and start our day. We stress, we live the anxiety right along with our child who's having a melt down.

The Mental health and burn out rate for caregivers is higher than anyone should ever have to live with.


I'm including the contact information for our Provincial leaders making these decisions. Please take a moment and let them know it's not ok. The future generation who may not be verbal enough to fight need your help.

Autism does not end at ford. Nor does it end at 5. It IS a diagnosis and not the prognosis of how any child may progress and thrive in life.

Posted by XaviersMama at 3:06 PM 9 comments: